- this is why skiers and snowboarders from all over Ukraine come here. And in recent years, European, Canadian and American riders have discovered Svydovets. And they are becoming more and more. Why? Riders from abroad aptly emphasized the most important feature of the resort: there is a unique opportunity for freeride tours by snowmobile (snowcat freeride tours).

And really. Walking on camouflage or snowshoes is still more walking and less skating. Heliski - maybe cool, but too expensive (pay more than ride). Freeride tours on snowmobiles - the golden mean: affordable price and a whole day of off-piste skiing in the best locations. Dragobrat Freeride Center invites everyone to enjoy the freedom of freeride and the beauty of the Svydovets ridge. Our team includes experienced pilots of snowmobiles who live in the mountains and have been trained in Austria. Routes are laid with the involvement of professional rescue guides. Each trip is accompanied by guides-instructors who lead the group from the first minute to the last, monitoring the situation, weather conditions, keeping in sight each member of the group. We were the first and remain the best, because we are constantly gaining new living experience and pumping our own level.

Freeride is both a pleasure and a pumping level, but also a great responsibility! We urge you not to ride alone; always register with the rescue service; take the help of guides; to carry and be able to use avalanche equipment. Ride with professionals, safely and drive!

Height: 1763 m above sea level. (the first Gendarme) and 1780 m above sea level. (another Gendarme). The descent from the first Gendarme can be gentle, towards the resort. A steeper, steeper descent leads to the Oasis Shopping Center. Without knowledge of the terrain and terrain, the rider can drive through the woods past the finish line and get lost. On the route there are snow cornices inflated by the wind, avalanche-prone corridors. The route requires a level of training from intermediate and above. From the second Gendarme, the track first leads to Lake Ivor, and then coincides with the path from the first Gendarme. The snowmobiles of our freeride center also provide a great opportunity to make descents on the back of the Gendarme. Another route from this mountain - to Zastizh. We unroll the third Gendarme mainly from the reverse side. This mountain is especially interesting for confident riders with a high level of skiing.

This direction allows every skier and snowboarder - both pro and beginner - to choose the optimal line. The relief is diverse and fan-like. We also ride Urdu from the Nameless Mountain. The difference is that from the Gendarmes the angle of inclination is greater, and from the Nameless descent is lighter, there are lines on the sidelines. You can also make a wall passage. And in Urda there is a fraternal "Hotel California" for lost tourists. Ask our guides when you ride, they can tell a lot of interesting and instructive. ;)

Freeride routes on the slopes of Urda were developed and laid by the DFC team in 2018. Prior to that, it was considered a remote and inaccessible place, where only the most stubborn skiers reached. But the prospect of a chic freeride prompted us to make this opportunity accessible to all. And our snowmobiles perfectly cope with this task!

This, as the name implies, is the reverse side of Mount Stig (1704 m above sea level). The first descent of the group is often carried out in the direction of Zastizh. During the race, the guides study the participants, their level of skiing, assess the suitability of the equipment. At this stage, if a skier or snowboarder realizes that his equipment or experience and skills are not yet at the proper level, he can leave the group and return to the resort in the area of ​​the lifts. Guides may refuse a participant to continue the tour due to a mismatch between the level of skiing or skiing / snowboarding. There is no possibility to interrupt the tour in the future.

The highest peak of the Svydovets ridge. The most popular route of fraternal freeriders from Bliznytsia is to the left to the Gendarmerie and further to the Oasis shopping mall. But we know many more ways to freeride from Gemini, and our snowmobiles give more opportunities and freedom of movement. Snow blows, cornices on Bliznytsia gain many tons of weight during the winter and become the most dangerous during spring thaws. Therefore, we do not advise you to try your luck here if you are not sure of your knowledge of avalanche safety.

- a chic place for skiing even in the most joyful conditions. When the wind blows the snow from the tops, exposing the solid ice and spurs, then in the meadow in the woods we are always waiting for loose snow (the same one that the wind blew from the peaks). The descent here is characterized by a variety of terrain, changing the angles of inclination, interesting skiing between the trees, which develops a reaction and pumps the skill of both skiers and boarders. The starting point on this route is the distant Bliznytsya.

The descent to the Brailka meadow is liked by riders for its gentle slopes. Here you can relax and choose a beautiful line on the powder fields. And the reverse side of the Twin has both sloping sections and segments that must be traversed. Group members are required to pay attention to the instructions of the guides leading the group. (As, in principle, on all descents!)

At this location, the vagaries of the weather and wind currents form snow boards, which must be watched especially during descents through narrow passages. The transfer of snow masses by winds in the Big Boiler also sometimes creates fields of loose snow at gentle angles. The northern slopes retain snow when the sun floods the snow in other places. In general, the terrain here is diverse (there are drops, narrow and wide passages). The group can be divided into more confident riders and those who prefer calm, light skating. Cauldron Mountain - 1770m above sea level. 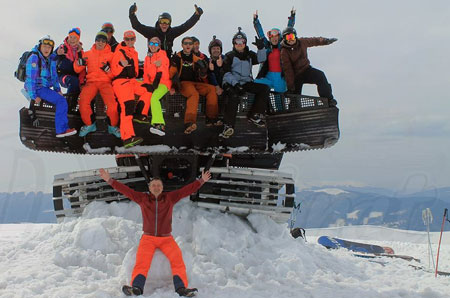 Gereshaska (Dogyaska) is called both a mountain (1761 m above sea level) and an alpine lake below it. The steepest corridors between the spurs of the Geresha jumper reach 50 ° at the steepest points, and this is the no fall zone. But very close there are wide virgin fields, which allows group members to choose the descent according to their skills and desires. An interesting descent is the wall, which, however, is always overcome by almost all our riders. One of the longest routes is Dragobrat Freeride Center. It was opened in 2015 on its first snowboard by the founder of DFC - Igor Borisyak.

Routes to the Yarosheska mountain meadow run mostly from Velyky Kotly and Nameless Mountain. It is remembered by all its shepherd's huts. On the route: not dense Christmas trees, very interesting for skiing at the bottom of the slope, snow fields. Length of descent - 2 km; height difference - 550 m .; angle of inclination from 20 to 30 °, depending on the descent line.

****The choice of routes for each specific day of skiing is made with the analysis and taking into account the current weather conditions and seasonality, quantity and quality of snow cover, avalanche safety and the general level of group members. Each departure is registered at the rescue service headquarters. Under adverse conditions or when rescuers are banned, departure is canceled. As unfortunate as it may be for you and for us, security is above all!